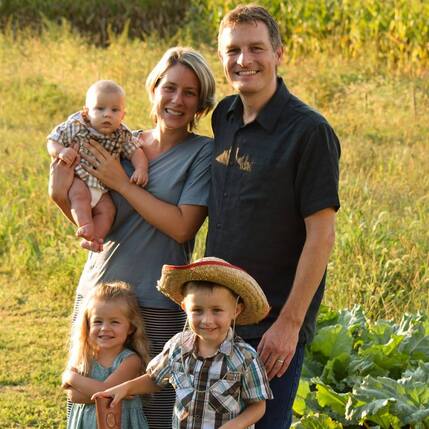 My husband Dave and I were thrilled to find out we were pregnant with our first child. I was even more thrilled when Dave told me that he wholly supported the idea of a home birth. We also chose to keep the medical industry out of both my birth and pregnancy. This is sometimes referred to as a “free birth”.  Since Dave and I both understood the power of our words, we spoke into my pregnancy and delivery the whole nine months. I was able to enjoy every day of being pregnant and had no negative symptoms of any kind. As labor began, the first contractions were met with perfect excitement. There was no anxiety of any kind and this made for such a wonderfully peaceful birthing experience. I walked around our apartment and talked to Dave. Then there were times when I just wanted to be still. I slept on and off and eventually ended up in the bath tub. I had no pain. Labor lasted twelve hours and at 5:00 pm on March 28th our son Sidney was born. It was truly an amazing experience. What always has stood out the most about my first birth was the peace. True peace comes from knowing Jesus and unlike counterfeit peace, which is circumstantial and gives way to fear and anxiety, the peace of Jesus never leaves.  Dave and I certainly learned a lot with the birth of our son. We faced some challenges following his birth but during it all we were so aware of the incredible power of the peace of God. It got us over every hurdle and our walks with God became stronger and for that we are both so very grateful.

A short three and a half months after having our son, we got pregnant again. This time around, we decided to consult a midwife. We were so happy to find a midwife who did homebirths. My husband and I immediately began to make declarations over my pregnancy, our baby and my delivery. Once again, I had an amazingly blessed pregnancy! I enjoyed every day my little one grew inside my womb. There was no sickness, no swelling, no emotional roller coasters. We got what we professed which was an easy and enjoyable pregnancy. Labor began at 7pm on a Friday. Like with my son, labor lasted twelve hours. This was the only challenging part about my second delivery; I was tired. I am a big fan of sleep and I usually enjoy a sold nine hours or so each night. Although I did take little power naps between contractions, I so badly wanted to just go to sleep. Obviously, this was not an option especially when the time to deliver my baby came closer. As transition time approached, I became so very grateful for the grace of God. Being so tired, I was able to sympathize with women who choose to have epidurals just so they can sleep. An epidural is not an option at a home birth so I relied entirely on the grace available to me to get through the pushing. Thankfully, my daughter only took three pushes to be born. The incredible desire to want to sleep, of course, disappeared as soon as my daughter Talia was in my arms. I found myself thanking God over and over as I held her because I knew I had just experienced the amazing blessing of standing on his Word. I was never in pain and He gave me the grace I needed when I needed it. Because of that, and believing in the power of our words, I was able to enjoy the wonder of another supernatural home birth.

By the time I became pregnant with my third child, walking in the revelation of “you get what you say” (especially when you stand of the promises of God) had become quite second nature to my husband and I. We very thoughtfully decided what we would speak over this pregnancy and delivery. Once again, we would be having a home birth. I didn’t think I could actually have a better pregnancy than I had with my last two children but I was wrong. This time around I had so much energy, slept great all nine months, gained the least amount of weight and was so full of excitement the entire time. Plus, I had the enthusiasm and encouragement of my two and three year old who were so excited about having a new baby. We planned on giving birth on May 1st (yes, we did declare our delivery date) and things were progressing perfectly for that to be the case. Then my father, who is an international pilot, got called in for a trip and would not be around on May 1st. So I began to tell our baby that he was welcome and could come any time. I was past thirty sever weeks already when I began declaring this so I was considered full-term. April 29th came, which was a Friday, and I decided that my baby needed to be born that day or else my dad would probably not get to meet him for a few weeks. The morning of the 29th, my children and I started out the day as usual by doing some errands. We then went and had lunch with my husband at his work. When we got home, which was about 1:30pm, I began telling my body to go into labor as well as did a few more natural things like squats and nipple stimulation. At 2:09pm, I had my first contraction. I called my midwife immediately and while on the phone my water broke. I had been dilating for a week at this point so I knew that this was not going to take long. I called my husband Dave and told him he should head home so he could fill up the birthing pool. I then called my dad and told him to head over as soon as he could. He was out to lunch with my mom and said that they would leave as soon as they were done. I knew that my baby was going to be born before they got here. My midwives arrived with a half hour to spare. At 4:28pm, our son Henry was born. It was the most amazing delivery ever! I had no pain, it was so very short, and my son was born perfectly healthy having had a smooth, short ride into this world. Every single thing we spoke over our delivery came to pass! I was wide awake and full of energy and gladly welcomed family and friends to come meet our newest blessing. It is such a joy to know that I will never have to have a painful, traumatic birth and I thank God for the revelation of the power of my words.
​
Powered by