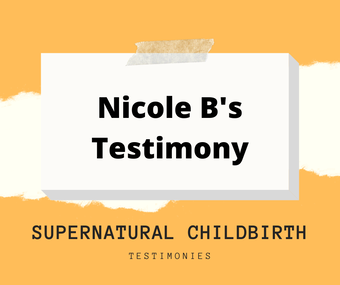 In 2013, I became pregnant with our (My Husband Troy and I, Nicole) first child. We were so excited! We had our first ultrasound at 10 weeks and were able to see the little baby. It was the most beautiful thing I had ever seen. On May 31st, we went in for our 13 week ultrasound. I remember I was a black dress with white polka dots and a black now right above my tummy that was just starting to poke out. I lay down on the ultrasound table and said to the technician, “You have the best job in the world, getting to see all the babies growing!” ​
​
Then I remember the technician searching and searching and searching. I just stared at the ceiling because I knew I didn’t see a heartbeat. My husband eagerly asked, “Where’s the baby?” with a smile. And she said the baby is gone; would you like to stay in the room? I’m going to get the doctor for you. I never miscarried. The baby had simply disappeared. I needed surgery to remove the remaining womb for the baby as it was still actively growing without a fetus. They tried to schedule it for my birthday June 5th, but thank God, they were able to perform the surgery on June 4th.

I’ll never forget the heartbreak my husband and I experienced. One day, I was on the couch crying and I asked the Lord to comfort me. I was home alone and I felt an arm come around me and hold me, so I cuddled into the chest and relaxed. I realized a man was holding me and it wasn’t my husband because I was supposed to be home alone. I jumped up and no one was there. Again another day, I was alone on my guest bed reading and I began to cry. So I put down my book and cried out in my heart to the Lord. I felt Him sit down on the bed next to me and I felt so comforted again. And again it happened that I was resting and needing comfort and he petted my head. After going through that miscarriage, He taught me the true meaning of the Lord IS my Comforter. He really is.

After having a miscarriage, my husband and I tried for ten months to get pregnant with no avail. I finally went to my OBGYN and she tested me to see if anything was out of the ordinary. The results came back that my prolactin was very high and there was a chance of a pituitary tumor. She mentioned having to put me on a medicine to bring the prolactin down because I couldn’t get pregnant with it that high. Well, I wouldn’t accept that. I began fervently praying for a child. I even prayed with a visiting pastor from Africa. He asked my husband to join in prayer and before we were done, he said “God has told me that you have conceived and you can name your child it will be born!” I thought to myself, yeah well I can say a lot of things too but they don’t happen. Just the Friday before, the OBGYN gave me a blood test to test for pregnancy and it had bHCG in it. It was highly unlikely that I would conceive after that as I had been tracking my ovulation and the timings didn’t match. But I held onto his words anyway and would think about them every now and then. I then learned what it meant when in the bible it says that Mary pondered in her heart about what the angel had told her. I was pondering in my heart what the pastor had said.

The following Saturday God said to me “test for pregnancy” and I said no. He says take the test, and I thought it was pointless. But he persisted, so I obeyed. I couldn’t believe what I was seeing. A faint line for pregnancy! So I waited an hour and took another line! So I waited another hour and took another! This went on for 5 more hours, each time the line got darker and darker. So that Monday I told my OBGYN and she said it was probably a false positive to come in for a blood test. Which I did and the bHCG was more than doubling every two days. Which is wonderful! A strong pregnancy I thought. Well of course, they thought something was wrong. That I either had an ectopic or molar pregnancy and they needed to perform an ultrasound at 6 weeks to verify the pregnancy. So I went in and there she was! My beautiful baby!

At 14 weeks, I was sitting at my desk and I felt contractions and severe pain. I thought I was miscarrying. I began to pray God’s word over us. I made my way into the office and was told that a cyst on my ovary had burst and released blood over my uterus which stimulates contractions. I was going to have to wait and see about miscarrying as it could occur and to call if I had any leakage of fluid. I was soo upset! Then I remembered the prophecy that this baby would be born and I claimed more than that, that she would be full term too! I went outside and prayed and bam! The pain was gone, I felt fine and the baby was okay.
At 19 weeks, we went in to determine the sex of our baby. We were told she’s a girl! We were so thrilled. That’s exactly what Troy and I wanted. But of course, they also said she had a small hole in her heart and that it would probably close, but that we had to come back for a re-examination in a month. So I prayed and prayed and prayed about it and when we returned at 23 weeks, the hole indeed had closed, but now my cervix was funneling and I was referred to a maternal fetal specialist.

The maternal fetal specialist performed the examination and told me to get my bags ready for the hospital as I wouldn’t be able to make it past 36 weeks. I was so sad about that. But then to add to it they told me she would have a left clubbed foot! I couldn’t believe it! I wouldn’t accept it! This whole time God had been answering my prayers, so I would pray about that too! So I prayed every time the baby kicked and moved or when I would think of her and remember to pray.

Each week I had to go for an ultrasound to check the length of my cervix and after a few weeks it began to grow! So I asked the technician to check the baby’s foot to see if that was healed as well. But she said there is a left clubbed foot, but also the right was clubbed as well. I said that is it! My daughter is healed by Jesus and I accepted that truth and refused to check or doubt it again.
Everyday I prayed for my baby to be full term and whole perfectly made by the Lord. And He answered my prayers. She was not only full term, but overdue! She was born at 41 weeks and 4 days. God had closed my cervix so tightly to keep her in there that it wouldn’t open for birth! After 14 hours of labor I never dilated and had to have an emergency C-Section. To my expectation of answered prayer, she was born with no clubbed feet!!! After birth they told me that the cord had been wrapped around her neck 3 times which is why she never dropped and wasn't able to come out on her own. Yet God in His providence kept her healthy, safe and alive! My perfectly MADE BY GOD child was born January 27, 2015 at 12:45 am weighing 8lbs 8oz and 21 inches long. Praise God. His mercy endures forever. He hears the fervent prayer of His children. He is the Lord our Healer and Comforter. He is mighty righteous and merciful. He loves us so much! And He looks for ways to show us. Thank you God for answering the prayers of your servant.

I hope this brings you hope and encouragement to seek God first for all of your needs. God bless you!