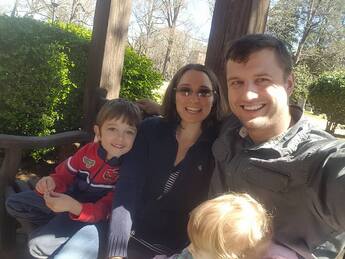 When my husband and I found out that we were expecting a baby, we were a bit surprised.  We had just moved halfway across the country after my husband had finished his service in the army. He was about to start a new career, I was going back to work as a nanny, we were trying to get or feet planted in the world, and let’s be honest, our feet were wavering.

We had a one month lapse in insurance so after I took a pregnancy test, I went to a pregnancy resource center for them to confirm that I was pregnant and do an ultrasound. I went in expecting to be 8 weeks pregnant, but the ultrasound showed that I was only 5 weeks along. The nurse tried to detect a heartbeat, but couldn’t. She tried a few different ways, but she still couldn’t get a heartbeat. Time seemed to stand still and my heart sank to the bottom of my stomach.

I tried not to cry as I walked out of the ultrasound room and back to meet with the doctor. He asked if I was having any pregnancy symptoms, and I said I wasn’t. He smiled and said, “You must be made to have babies.” That affirmation made my heart leap for a second as I realized that I was created to become a mother. But, based on the information we had, it seemed like the baby had passed away three weeks prior and my body had yet to have a miscarriage. Yet, there was also hope. He said it was difficult to detect the heartbeat that early, so it could be that it was simply too soon. The doctor prayed with me, as well as many of the other caring workers, and we scheduled an appointment for the following week to check to see if there was any progress.

That was a very long week. I wanted to have a baby, not a D&C. I did not know what to make of anything, any feeling, ache, or pain. Was it a miscarriage occurring, or the pregnancy progressing? Luckily, I shared my situation with a few other believers. They prayed for me and my baby with authority, calling out the baby’s purpose and destiny, instead of mirroring the fear in my own heart. Throughout the week, their words and prayers echoed in my mind, providing hope amongst the fear.
I went back to the pregnancy resource center, still filled with nerves. I remember trying to read a book while I waited, but my mind was racing. The moment couldn’t come soon enough, but at the same thought, I didn’t know if I wanted the moment to come. So much of my future hinged on this ultrasound. Would I be a mom? Would I ever be a mom?  Was something wrong with me? Did I do something that could have potentially harmed this baby?

The moment finally came. I tried to look strong and hold it together, but I was seconds away from breaking into tears. The ultrasound picture showed up on the screen, and it was different from the week before. The baby was larger and more formed, and there was a heartbeat. A perfect heartbeat. The doctor remarked how the growth had been remarkable, and we all rejoiced!
A few months later, a friend gave me the book, “Supernatural Childbirth” by Jackie Mize and shared with me some of their own testimonies.  As soon as I heard I could have a baby without pain, I was so in! I began reading the book and speaking the promises over myself every day. I learned that faith often comes by hearing (Rom. 10:17), so even though it felt silly talking to myself, I would experience the benefits later in my labor. I didn’t share my plans with many people because I really didn’t care to hear negative remarks. Even my husband thought it was a bit “out there.”
​
Every day, I worked on filling my head and my heart with testimonies and God’s. One testimony was of a three-hour labor and delivery. I thought, “I can handle that!” and decided I’d ask for that as well! Often times, we think that God’s answering of our prayers depends on how good we are or the things that we do or don’t do. But I can’t find that anywhere in my Bible. God desires to bless us and give us gifts, just as we enjoy giving our own children gifts. The Bible says, “If you then, being evil, know how to give good gifts to your children, how much more will your Father who is in heaven give what is good to those who ask Him!” (Matt. 7:11).

When we realize our value to God and our position in Christ, none of this seems like a lot to ask for. It’s something that Jesus already willingly paid for by laying down his own life. It brings God great joy when we ask for things according to his will (1 John 5:14) because he already made provision for it! It would be like us sacrificing everything that we have to buy a gift for a loved one. Mortgaging the house, selling the car, only to finally purchase the gift and leave it in the box on a shelf somewhere. That doesn’t make much sense, does it?

So I prayed specifically for a three-hour labor and delivery, along with speaking the confessions Jackie Mize wrote out. Then finally, the moment for my son’s birth came. We had just gone out to dinner with great friends and had a joyful evening! I settled down for bed around eleven, and about an hour later I woke up and felt like I really needed to use the restroom. As I was leaving the bathroom, my water ruptured a little bit and I felt a slight trickle of water rush out. Then it hit me that I was in labor.
I totally panicked. Everything I had read flew out the door and my whole body started to shake. I could barely walk into the bedroom to wake up my husband because my body was shaking so strongly. I woke him up and said, “Frank, I think it’s time”.
With his eyes still closed, he said, “No I don’t think so; you should go back to bed.” In my utter panic, his advice actually sounded really good! I would go back to bed and pretend nothing was happening!  I tried to sleep, but laying down was uncomfortable so I headed to the living room to sit on the couch and read for a bit.

About twenty minutes later, my husband arose from his slumber and said, “I think we should go to the hospital.” Before we headed to the car, I had to grab every last minute item I could think of. I grabbed bananas, a heating pack, a few text books in case I had some down time (the car smelled like old bananas by the time we got back to head home!). Then we were off on our ten-minute drive to the hospital.  Once I was in the car, I noticed my first contraction. It felt strong, like a muscle contraction, but they didn’t hurt. Instead, it made me even more excited that the baby was actually coming!

Finally, we got to the labor and delivery unit, and I smiled and greeted the nurse. She looked at me strangely, and I explained that I was in labor.  She seemed very frustrated as she explained to me the procedures. She told me that I really needed to call my doctor’s office first before I came in because they don’t like having to send moms-to-be home in the middle of the night, but that I had to be at a certain point before they admitted me in.

I understood the procedures and was starting to feel really disappointed. Did we come to the hospital for nothing? They agreed to check me before sending me home so I headed back to the triage room. My parents met me back there, and I was already starting to feel badly for waking them up and dragging them out in the middle of the night!

The nurse had me lay down to see how dilated I was. She looked at me and said, “This is strange… ” I was certainly perplexed, after all, those are interesting words to hear as your cervix is being checked! Then she said, “You’re either not dilated at all, or you’re really dilated but I can’t tell which one.” She said she was going to go get a doctor for a second opinion.

She left, and I was fully disappointed and apologetic to my family, thinking this was all just a false alarm. The doctor came in to check, and she looked at the nurse and said, “Yeah, you’re right…”

Then she looked at me and said, “You’re 8 cm dilated!”

I was elated and so relieved to not have to head home at two in the morning! The nurse hesitantly asked me if I wanted an epidural, still completely surprised that I was actually in labor. And I smiled and said I was doing fine!
We all got settled into the delivery room, and they had a wonderful, relaxing tub that I sat in for about an hour. I had picked out some scriptures and reading material for my husband and parents to read to me, and I was able to just be still before God, and relax in the tub. The contractions were intense and I could feel the pressure of the baby’s head, but I wasn’t in pain. My nurse looked at me and said, “I don’t know what you’re doing, but keep on doing it because it’s working!” Those words were so reassuring to me! All I was “doing” was putting my hope, peace, and trust in Jesus, knowing that He had already taken my punishment and my pain on the cross so that I wouldn’t have to!

About an hour later, the nurse came to check on my progress. At that point, I was 9 ½ cm dilated. Delivery was just around the corner! I went to use the bathroom, and I overheard my husband asking how long the delivery would take. The nurse said that it could be two hours because this was my first delivery. My heart sank! I didn’t know how I could be pushing for two hours. I was feeling tired already; there was no way that I could do that! I took my focus off of God and placed it on myself. I went from faith to fear and consequently my body went from peace to pain.

I decided I wanted to have an epidural. I was so close to actually delivering that the doctors gave me a spinal injection first because they didn’t think the epidural would kick in fast enough. Yet even at this stage, the anesthesiologist joked that normally women are yelling and cursing at him to hurry up when they’re that far along.

Afterwards, I was able to sleep for a bit. Then, we welcomed our precious son into the world! The birth was an incredible experience, and I knew God had done something incredible with my labor and delivery. From the time my labor began to the time of my epidural was three hours. After the epidural, I didn’t dilate any further until I began pushing (and I pushed for less than thirty minutes). I left the hospital filled with wonder and expectation of what God would do in my next pregnancy and birth. I knew I experienced the miraculous, but I also knew there was more!
About Alex
Powered by